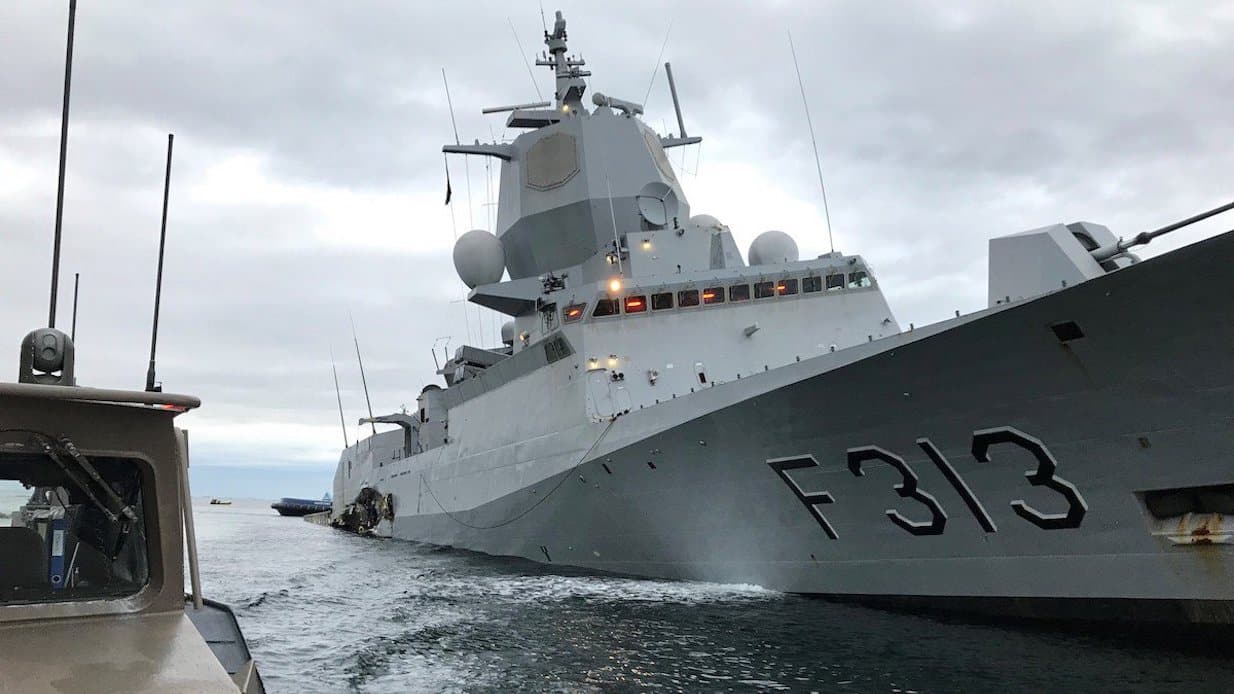 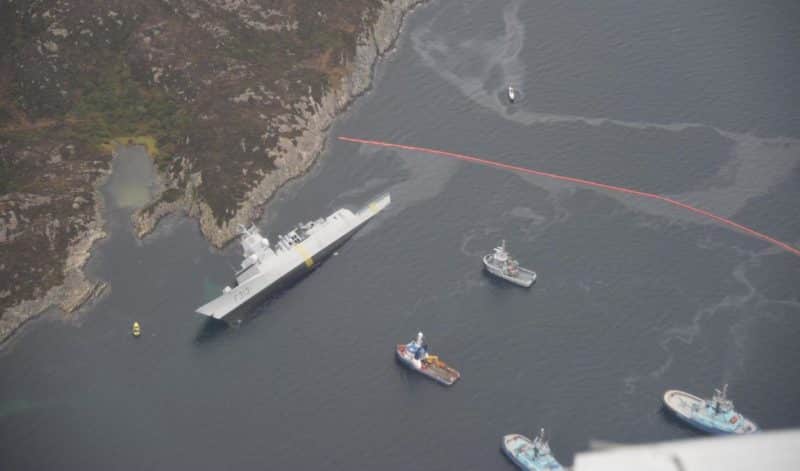 The Accident Investigation Board of Norway (AIBN) released Thursday its preliminary report on its investigation into the November 8 collision involving the Norwegian frigate ‘KNM Helge Ingstad’ and a laden commercial oil tanker Sola TS near the Sture terminal in Hjeltefjorden, Norway.

The collision resulted in extensive damage to the frigate, leading to the abandoning of the ship and its sinking close to shore. Only minor damage was sustained by the tanker.

There were no serious injuries among the 137 sailors on board the frigate and 23 crewmembers of the Sola TS.

The AIBN says the purpose of the preliminary report is to communicate information obtained thus far in the on-going investigation, provide a brief update on how the investigation is progressing, and offer a preliminary description of the sequence of events and safety-critical issues identified at this stage.

The AIBN’s investigation will not assign blame and/or liability under criminal or civil law, but it will determine whether there is a need to propose safety recommendations for the purpose of improving safety at sea, including from the armed forces perspective.

The AIBN has made two interim safety recommendation relating to the frigate’s watertight compartments.

According to the AIBN, the initial investigation has focused on establishing a preliminary description of the sequence of events, and mapping what took place on board ‘KNM Helge Ingstad’ and ‘Sola TS’ up until the time of the accident at 04:01, including the vessels’ communication with Fedje Vessel Traffic Services (VTS).

The report’s preliminary description of the sequence of events leading up to the incident are posted in full below:

On Thursday 8 November 2018, the frigate ‘KNM Helge Ingstad’ was on a southerly course in inshore waters north of Bergen. Navigation training was being conducted as usual during a transit voyage.

Before the vessel entered Fedje VTS’s service area, the crew notified that they would enter the area from the north and stated their planned route. This was logged by Fedje VTS at 02:40.

During the southbound voyage at a speed of about 17–18 knots, the AIS on board ‘KNM Helge Ingstad’ was set to receiver mode (receipt only, no transmission of own data), the vessel’s navigation lights were lit and the vessel could be observed by radar.

Shortly before 03:00, a pilot from the Norwegian Coastal Administration boarded the Malta- registered tanker ‘Sola TS’, which had been loaded with crude oil at the Sture terminal and was getting ready to depart.

Two tugboats arrived soon after, to assist during the departure from the terminal.

At 03:13, the pilot on ‘Sola TS’ called Fedje VTS with the message that they were starting to unmoor and preparing for departure.

The VTS confirmed receipt of the information. Around that time, there were three other northbound vessels in the area south of the Sture terminal.

At around 03:40, the navigation officer coming on watch arrived on the bridge of ‘KNM Helge Ingstad’, went through the handover procedure and was informed about vessel traffic in the waters by the officer leaving the watch.

The three northbound vessels were registered and plotted on the radar on board ‘KNM Helge Ingstad’. During the watch handover, an object with many lights was observed lying still just outside the Sture terminal.

At approximately 03:45, the pilot on ‘Sola TS’ notified Fedje VTS that the tanker was departing from the Sture terminal and heading west out Fedjeosen.

At approximately 03:55, the officer coming on watch on ‘KNM Helge Ingstad’ took over the watch, and the previous officer of the watch left the bridge.

Assisted by the two tugboats, the tanker ‘Sola TS’ started to move away from the quay at the Sture terminal.

The vessel lay with its starboard side to the quay and the bow pointing south. When ‘Sola TS’ was sufficiently far from the quay, the vessel was turned to port to set the course at 350°, towards Fedjeosen.

As ‘Sola TS’ was leaving the Sture terminal, three vessels approached from the south, at starboard quarter of the tanker, as it had now turned and set a northerly course. When ‘Sola TS’ left the quay, its navigation lights and deck lights were lit.

At approximately 03:57 the pilot observed the echo of a southbound vessel on the radar. The vessel was north of ‘Sola TS’. The pilot saw the vessel’s green light and that it would cross his course line, but did not have an AIS signal for the vessel.

At 03:58, the pilot called Fedje VTS and asked for the name of the vessel that was heading towards the tanker on the port bow.

The VTS answered that they had no information about this vessel. The pilot and captain on ‘Sola TS’ then tried to contact the vessel in other ways.

They flashed the Aldis lamp, and the pilot requested a 10-degree course change to 000° from the captain on ‘Sola TS’.

At approximately 04:00, Fedje VTS called ‘Sola TS’ with the information that the vessel was possibly ‘KNM Helge Ingstad’.

Shortly thereafter, ‘KNM Helge Ingstad’ carried out an avoidance maneuver, but it was too late, and the two vessels collided.

‘KNM Helge Ingstad’ sustained major damage in the collision. Control of the rudder and propulsion was lost.

This caused the vessel to continue uncontrolled towards the shore, where it grounded at 04:11, approximately 10 minutes after the collision. As the vessel filled up with water, its stability and buoyancy deteriorated and ‘KNM Helge Ingstad’ was evacuated.

The report goes on to provide a preliminary assessments, which is posted in part below:

It is highly probable that both these factors gave the crew on ‘KNM Helge Ingstad’ the impression early on that the lights belonged to a stationary object.

After the watch change at around 03:40–03:45, this was the basis for the bridge crew’s understanding of the situation.

Even though ‘Sola TS’ left the quay at around that time, there continued to be little relative movement of the lights as the tanker turned from a southerly to a northerly course.

The tanker’s use of deck lights after departure also meant that the crew on ‘KNM Helge Ingstad’ were unable to spot the navigation lights on ‘Sola TS’.

When ‘KNM Helge Ingstad’ at approximately 04:00 stated that they could not turn to starboard, it was based on a continued perception of the lights as being stationary and that a turn to starboard would send them straight into the lit object.

It was not until just after this that the crew on ‘KNM Helge Ingstad’ became aware that they were on collision course, at which time it was impossible to avoid a collision.

The AIBN’s preliminary assessment is that the accident was not caused by any single act or event, but can be explained by a series of interacting complex factors and circumstances.

The investigation team is seeking to identify and understand these factors. So far, the AIBN has not seen any indication of technical systems not working as intended up until the time of the collision.