”British sailor Alex Thomson defies the odds to finish second in the Vendée Globe, smashing the British record in the process.

After 74 days, 19 hours and 35 minutes at sea, British sailor Alex Thomson reached the finish line of the Vendée Globe on his boat HUGO BOSS at 7:37 UTC Friday 20th January 2017, and in doing so broke his own British record of 80 days for the fastest solo circumnavigation of the globe in a monohull.

As well as becoming the fastest Brit to ever sail solo around the world, Thomson has matched Dame Ellen MacArthur’s second place finish which she achieved back in the 2001 edition of the race. Thomson’s achievements are all the more extraordinary for the fact that he suffered potentially race-ending damage to his boat on day 13 at sea. A collision with an unidentified object in the water caused his starboard foil to break, but even with this set back Alex has fought until the finish securing second place.

At one point, Thomson fell some 800 miles behind the leader, but delivered the greatest performance of his career to get himself back in contention and to set up one of the most thrilling final stages that the Vendée Globe has ever seen.

Over the past week, Thomson and first placed sailor, Armel Le Céac’h, have been involved in a sprint to the line, with Thomson continuing to gain miles on his French rival. In doing so, the British sailor broke the world speed record, and at one point pulled the difference back to less than 40 nautical miles. The two sailors continued to battle it out to the end, before Le Cleac’h finally sealed victory on Thursday afternoon.

The Vendée Globe is a single-handed, non-stop, unassisted race around the world. Often termed ‘the Everest of Sailing’, the race – which takes place just once every four years – pushes sailors to their very limits, requiring them to compete alone at sea without stopping, setting foot on dry land, or receiving any form of assistance for almost three months.

It is one of the world’s toughest sporting challenges, with only 72 sailors to ever complete the race since its inception. Dangerous and unpredictable, only 18 of the 29 sailors who began this edition of the Vendée Globe remain in the race. In the past, three skippers have lost their lives attempting to conquer the challenge.

Thomson, who was greeted by thousands of people who flocked to Les Sables d’Olonne on the west coast of France to witness his triumphant return, said: “It’s incredible to be here in second place, particularly given the loss of my starboard foil in the early part of the race. In our sport, challenges do not get any tougher, so this is a moment I will never forget.”

“This result is not just for me; it’s for my sponsor, for HUGO BOSS, for my family and friends who have supported me, and for my entire team who have worked tirelessly both before and throughout the race. We have put in years of preparation to get to the start and to ensure both the boat and me were in the best possible shape to take on this phenomenal race.

“To sail down the canal here in Les Sables d’Olonne, back where it all started on November 6th and to see huge crowds of people was an amazing feeling. And to be back with my wife Kate and children Oscar and Georgia again is emotional and very special.”
The 2016-17 edition of the Vendée Globe began on Sunday, November 6th when Thomson, alongside 28 fellow skippers, set sail from Les Sables d’Olonne, France. Thomson and his team had spent more than two years ahead of the race designing and building a brand new IMOCA 60 race boat, HUGO BOSS. Despite the loss of the boat’s starboard foil early in the race, Thomson’s four years of intense training and preparation allowed for a recovery more defiant than anyone could ever have imaged.

CEO of Alex Thomson Racing, Stewart Hosford, said: “We are incredibly proud of what Alex has achieved. A race like this is the culmination of four years of hard work, training and preparation from both Alex and the team behind the scenes. We came here to win the Vendée Globe, but Alex’s 2nd place finish together with a number of new records is a superb achievement. Thank you to the team, sponsors and everyone who made this possible.” 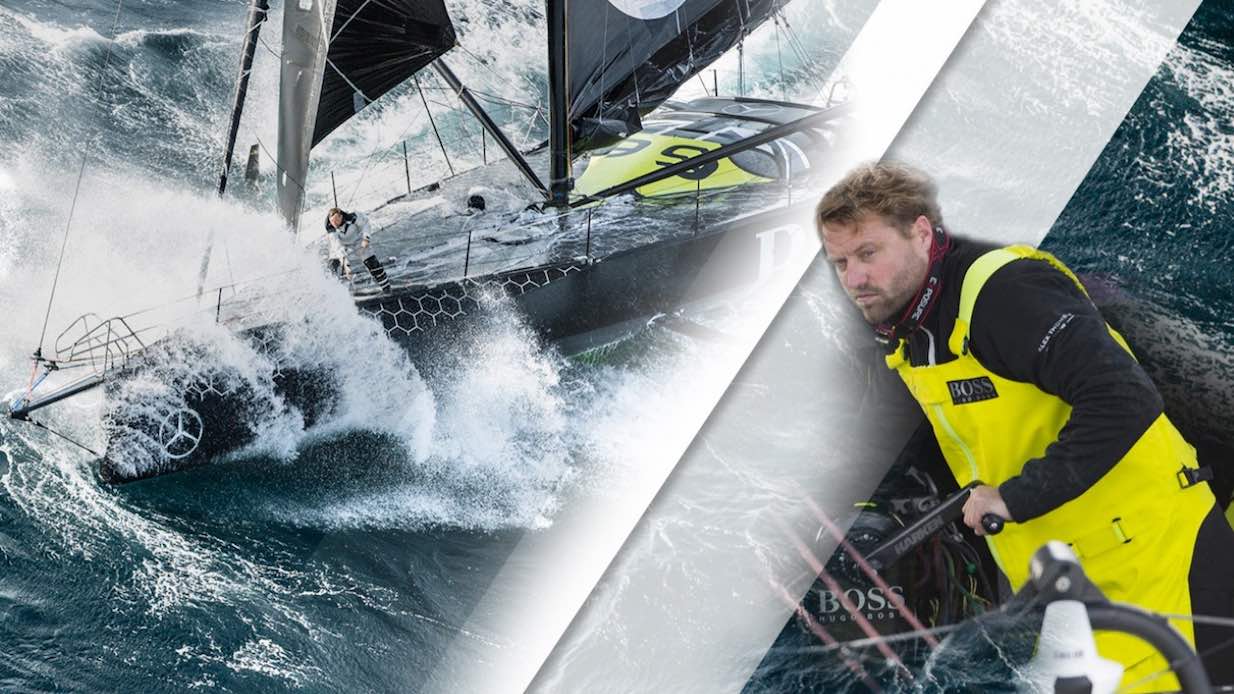