ACCORDION 1. n. the paths of two boats that are alternately getting lifts/headers, or 2. n. a temporary gain or loss relative to another boat on the same tack; ?this is an accordion for us? or 3. v. the act of sailing that kind of course. Used on Stars & Stripes on 95-04-26, and explained by Jobson.

ASSHOLE n. kink or hockle in a sheet or halyard that prevents it from running freely though a fairlead

BANG THE CORNER v. to sail all the way to one side of a race course in search of a strategic advantage

BLACKALLER n. kink or hockle in a sheet or halyard that prevents it from running freely though a fairlead

BRICK v. to tightly fold or flake a sail into a compact, heavy, rectangular shape

CADDIE n. mainsheet winch grinder, or in general, a mostly- physical helper in any position on a large boat

CASPER DOUSE n. spinnaker douse in which the sail collapses on the foredeck, covering the crew with white sailcloth. Popularized by Peter Isler during 1992 America?s Cup coverage.

FAST FORWARD v. sailing low and fast on a beat

FLAG ?EM v. to protest another yacht, signaled by displaying a protest flag

HAND SAILING v. describing sailing maneuvers, usually as part of a postmortem, by using palms of hands to represent courses and heel angles

HAWAIIAN ROUNDING n. A windward mark rounding in which the boat inside or astern forces the outside or leading boat well past the layline, towards Hawaii.

HIP n. windward quarter of a boat, referring to position of competitor, as in ?on our hip?

HOT IT UP v. to sail higher and faster on a running or reaching leg

HUNT v. to maneuver towards another boat that is obligated to keep clear, with the intent of causing a foul. The 1993 revision of the match racing rules significantly enlarges the ability of the right-of-way yacht to use this tactic, although it remains poorly understood by untrained television commentators.

HYDRO n. device on Stars & Stripes for reducing speed, alleged to resemble a large suction bailer so as not to count as a moveable appendage

KOCH BLOCK n. Running backstay or checkstay block positioned so that it could hit the head of an inattentive member of the afterguard when not under load. First used during the 1992 America?s Cup defense.

LEVERAGE n. transverse separation, allowing one boat to gain or loose with respect to the other in the event of a wind shift

LIVING v. ability to maintain speed to windward and behind a competitor, on the edge of bad air

MEXICAN TAKEDOWN n. spinnaker douse in which the boat jibes, but the spinnaker is left flying on the new windward side, where it collapses against the jib as it is pulled down. Used on camera by Dennis Conner during the race on April 13, 1995, but is believed to have been coined by Buddy Melges during the 1992 campaign. In ?92 it might have referred to a conventional floater drop and port rounding, during which the spinnaker blows off to the southeast, towards Mexico. See KIWI DOUSE.

PROTESTERONE n. Hormone responsible for propensity to file protests. Until 1995 it had been believed that because women have only vestigial protestes glands (where protesterone is synthesized) this behavior was sex-linked. However, researchers have now concluded that the smaller concentration of protesterone in women has a proportionately greater effect on their behavior.

REEL ?EM IN v. to gradually but significantly reduce the lead of the boat in front

REVERSE MEXICAN n. windward spinnaker douse, followed by a jibe. Different from a conventional floater drop because it?s done on a hot reaching angle, and with an assym there?s no need to trip the pole early. Called for and executed by Mighty Mary at first leeward mark on 95-04-26.

RUNWAY n. distance to layline, mark, or starting line, used in situations where room will be needed for acceleration. Used by T. Whiddon on Stars & Stripes, 95-04-26.

SEWER n. the below-decks space on a large racing yacht with minimal accommodations

SHRIMPING v. using the spinnaker in a manner reminiscent of a trawl net, as when trawling for shrimp. Often performed for a shrt time during a spinnaker douse.

SIT ON THEIR FACE v. to closely cover a competitor, matching them tack-for-tack and keeping them in bad air

SLAM-DUNK n. the act of tacking on another boat?s wind in sufficiently close proximity to prevent the other boat from tacking away. First popularized by Jim Kelly and Gary Jobson during 1987 America?s Cup coverage, in their attempt to make sailing tactics comprehensible to American viewers. Usage in Australia dates to 1983 America?s Cup coverage or earlier, however.

STRETCH DRIVE n. First used on television by Jim Kelly on 4-15-95. The meaning of this term in the context of sailboat racing is not fully understood.

VANITY JIBE n. an unnecessary jibe done for the purpose of passing close to yacht club, committee boat, or spectators

From the AMERICA?S CUP ? FREE PRESS. 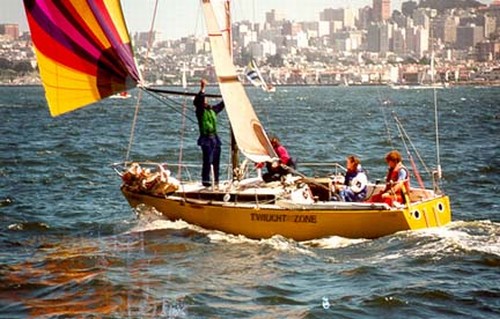 KALLAX SURSTROMMINGSFILEER ?? Do not open that can.

DO NOT OPEN THE CAN? NOT UNDER ANY CIRCUMSTANCES.

SEND IT TO YOUR EX-WIFE, YOUR WORST ENEMY, OR AXON?.BUT?.

DO NOT OPEN THE CAN.

Hmm, I seem to remember ?surstromming? as being something that is to lutefisk what theatre nuclear weapons are to hand grenades.

You are correct about the surstromming, rbr ? the essence of the recipe is: take one fish, bury it for a very long time, dig it up again, dinner is, um, served? :-O

SAS (Scandanavian Airlines) did, for a time, prohibit the carrying of those cans on their aircraft after one burst when the cabin pressure was lost. There was no loss of life, but massive loss of lunch.

Don?t open the can.