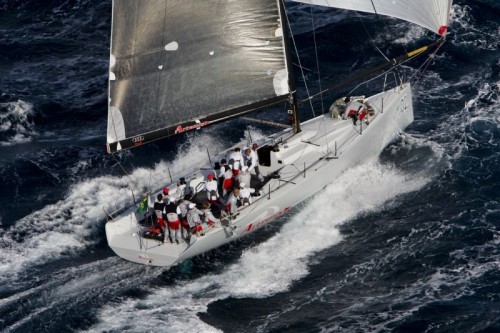 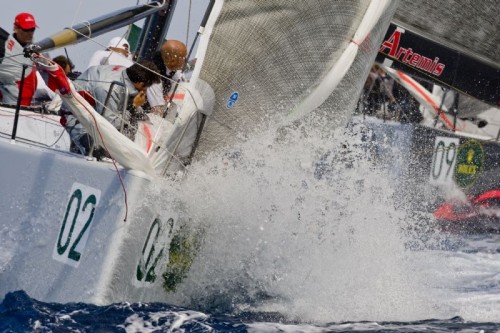 In the end they made it look easy. With only a single score outside the top five all week – a six in the first race – Torbjorn Tornqvist?s Artemis (SWE), with Russell Coutts in the role of tactician (and at times magician) swept to a comprehensive victory at the Rolex TP52 Global Championship 2007. The winning margin was 26.75 points ahead of 2006 Champion, Eamon Conneely?s Patches (IRL). The enormity of the win is emphasized by only 6 points separating the next four boats.

Two races were held today under a leaden sky and in light winds that struggled to reach double figures. The first race involved a 1.7 nautical mile leg and started in 6-7 knots. It was won by Alberto Roemmers? Siemens (ESP), which has steadily found her racing legs after a slow start to the week. The second race, with a 2 nm leg, was won by Patches; tactician Ian Walker and helm, Stuart Childerley, signing off the Championship with a third bullet. But the true story of the day was Artemis and it was Tornqvist who walked away with the Global Championship trophy and a Rolex Yacht-Master timepiece for his efforts. 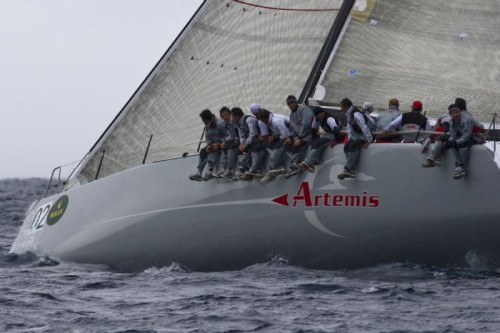 Tornqvist and crew hit both starts cleanly showing no signs of nerves. Her main rivals Patches and Mean Machine (MON) had differing fortunes. The Irish boat went for the pin end, whilst Peter de Ridder and tactician Ray Davies chose the Committee Boat – which was much more crowded. So much so that Mean Machine was squeezed out completely and had to execute a swift loop just before the gun that left her in the wake of the fleet. By the first windward mark the writing was on the wall for the Championship as Artemis rounded in second behind Siemens with John Kostecki in the hot seat. Danilo Salsi and DSK Comifin (POR) chose the penultimate race to put in their best performance of the week, rounding in third. But she was to prove no threat to the front two who strolled towards the finish.

There was plenty of movement further back in the fleet where the fight for the minor places was at stake. At the beginning of the day Mean Machine, Patches and Stay Calm were separated by 7.5 points and with two races on the card there was plenty to play for. As it was all three fluffed their lines in the first race finishing seventh, eighth and twelfth respectively. Siemens was lying in eighth this morning. At the end of the first race, she had moved into sixth and places two to five were filled by Mean Machine, Patches, Mutua Madrilena (which had scored a third) and Stay Calm.

Alberto Roemmers was delighted with their race win, ?it is never bad to finish first! We did an excellent start, probably the best we did here in Porto Cervo. On the previous days we had a number of bad starts and a couple of times we were over early. After a good start we remained in first place for the whole race and it was definitely a good feeling to cross the line in front.? 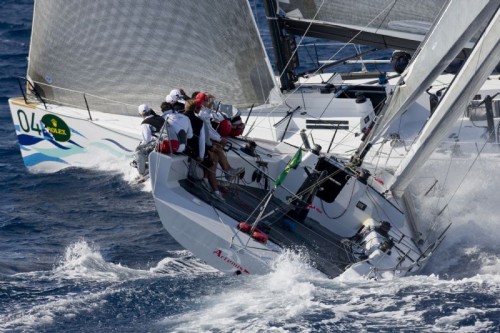 The final race of the series started in similar winds to the first, though a little less stable. The first beat finished with Patches in front and Artemis on her tail. Stay Calm went round in third. Siemens and Mean Machine – who holed her kite on the hoist – were the two back-markers. At the leeward gate, nothing had changed at the front of the fleet. The same was true of the back. But the wind was mucking about by now and a 20-degree course change was necessary for the second beat. Taking advantage of some big swings Siemens and Mean Machine moved up the fleet to fifth and eighth, whilst Mutua Madrilena fell back from seventh to tenth. Stay Calm?s solid third became a shaky fourth and by the finish she had slipped behind Siemens, enough to put Roemmers into an unexpected fourth overall, ?in the second race we decided to start very close to the Race Committee, but when we got there, there was absolutely no place to stick our boat so we ended up having to wait for some space to clear to be able to start. We were last until the second upwind leg when we were able to take the benefit from the shifts. Our tactics were good, we did a good last downwind leg and had a bit of luck as well. We are happy to finish fourth overall. This morning we were in eighth and did not expect to finish the Championship any better than fifth.?

Patches? confident run at the front had put her in with a shot at second providing Mean Machine could not improve on the final downwind leg. Despite their best efforts Mean Machine could not pass Windquest in seventh and second place overall was decided by half a point in favour of Patches. Peter de Ridder was happy with third overall, but disappointed not to be able to end the week on a high note. By contrast, outgoing champion Eamon Conneely was extremely happy with the outcome, ? it was a really great week. A challenging regatta with a lot of big breeze and then some days with no wind and others with very little. We were very, very pleased to get second overall. We went out today hoping to get to third place and the (last) race went our way and we ended up second. The race was very difficult but Ian Walker and Ian Moore sailed a very good last race and it was brilliant to get the win. We started the week with a win and finished with a win, so we were quite happy with that!? 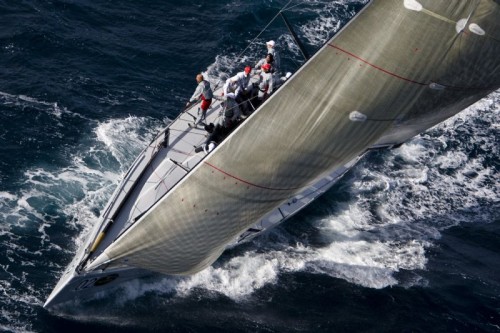 Conneely had nothing but praise for Tornqvist and his team, ?I think the winners are deserving winners. Torbjorn and Russell Coutts have sailed a perfect regatta. Right through they won a lot of races and were in the top five a lot too. They sailed consistently well and were just really good throughout. They are a very good team. Torbjorn is an excellent helmsman and, obviously, Russell is one of the best sailors in the world.?

Torbjorn Tornqvist seemed completely surprised by the overall win, even though it had been on the cards since halfway through the series, ?It is a strange feeling. I?m obviously delighted about the whole season, but this was our best regatta. this event was our goal for the season. (The TP52) was a new thing for me, it was a new campaign and we thought it was going to take some time to get it right. But this was at the end of the season, the boat was designed for windier conditions, we probably would be good by now and this is what we aimed for. And, we were good at this event. What can I say – it?s unreal!?

Whilst Tornqvist was surprised by the size of the victory, he felt their preparation had been heading in the right direction all season, ?I am really surprised that we won with such a margin by the end. I think that the trend was pointing that we would do a good regatta, but we all knew how it is with so many good boats out there. You cannot take anything for granted. We feel like we?ve been on the top before and then boom, something happens and then you are tenth, twelfth in the field, which shows its strength and also how small the margins are for error. The team has sailed together and knows each other so well now and that has translated into results.?

With a team comprising many of the top names in the sport including: Coutts, Juan Vila, Ed Smyth, Ross Halcrow, James Dagg, Andrew Taylor, Jared Henderson, Richard Meacham, Peter van Nieuwenhuyzen, Jeremy Lomas and Max Sirena; Tornqvist could be excused for having felt intimidated sat in the helmsman?s position, but he has clearly relished sailing in such exulted company and learnt from the opportunity, ?it?s a challenge and I like challenges. coming into this season I felt the pressure of sailing with such good sailors and sometimes I thought am I going to be the weak link in this, but I have had great support. I have probably improved as we have gone on: starting, how to accelerate, getting the timing right. And, today it was good, but I can improve more!? 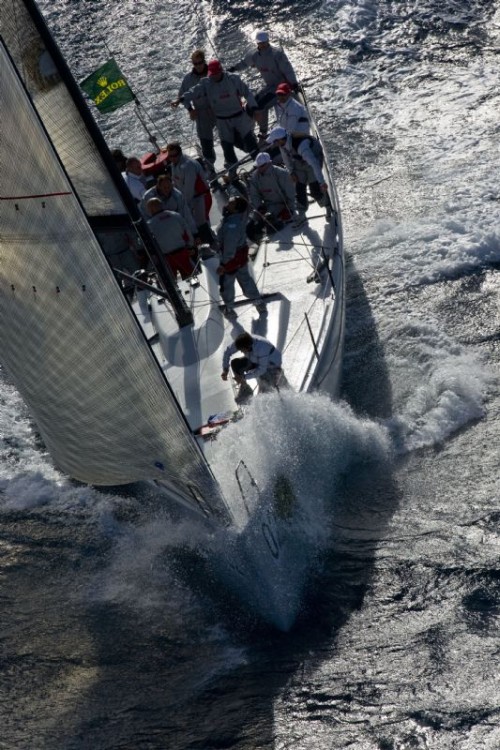 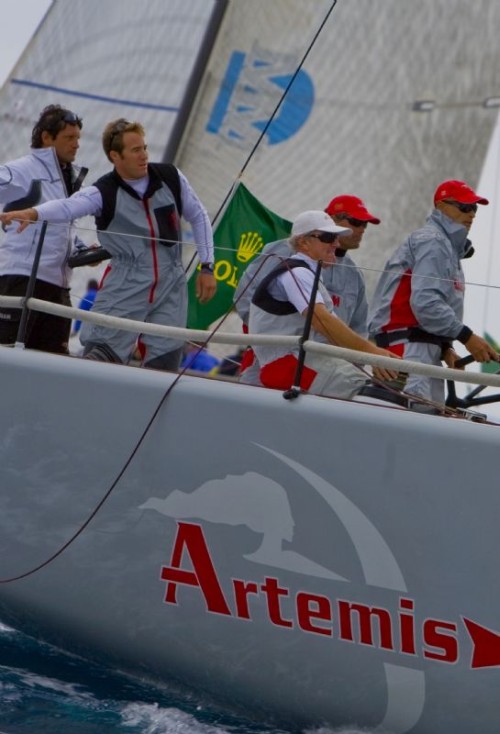