The dramatic incident saw a mistake by Peter Burling and his Kiwi team lead to their boat digging its nose deep into the water, lifting its stern and capsizing, leaving three of the teams’ sailors clinging on inside the cockpits on the starboard hull while the other three were ejected into the water. All six sailors were quickly accounted for as safe and unharmed and the team’s boat was righted and taken back to their base in the America’s Cup Village.

The capsize was not the Kiwis’ first issue of the day. Even before the first race of the afternoon they had to return to base to fit their spare wingsail after an unknown problem was discovered on the wingsail they were intending to race with.

The whole team pulled together and managed to fit their replacement wingsail, and get back out in time for the first race of the day with Land Rover BAR.
However, the biggest talking point of the day was Emirates Team New Zealand’s capsize.

“Firstly, and the most important thing for us, is that all the guys on board are safe and with no major injuries,” said Peter Burling. “It is definitely a relief when you see them falling off that you can look back and see their heads above water and that they’re all fine.

“We sustained quite a bit of damage to the boat but the shore guys are assessing the damage and we feel we will be able to repair it and get back out and into the action.

“The first race was a massive effort for the whole team. We managed to fit the second wing to the boat before the race and it was amazing to see the whole team come together and put their efforts into the boat.
“To be able to reward them with a win was incredibly pleasing because it was certainly a whole team effort.

“In the second race, as we tried to accelerate away from the start line we got really high on the foils and then and then came down really quickly. We are not sure what caused the capsize yet but we will go back and assess it.

“As a group of New Zealanders we are incredibly resilient, that first race showed that, and looking forward I think that first point could prove crucial.

“We’ll bounce back from this, get the boat back to 100 percent and get back out there.”

In reply, Sir Ben Ainslie reflected on what he said was the most exciting day of racing in his life.

“It was an amazing day of sailing. Certainly the most exciting and exhilarating racing I’ve ever been involved in, in my life,” said the Land Rover BAR helmsman.

“We were pleased with how we sailed as a team because I think all of the teams were struggling to get around the course. Ultimately one loss and one win, considering the conditions, we are happy with that.”

On the incident in their second race of the day, which resulted in Peter Burling and Emirates Team New Zealand’s capsize, Ainslie added, “It appeared to be a slight misjudgement from Peter but in these conditions it isn’t easy, but all of us sitting here are not going to pass criticism because these boats are incredibly hard to sail and these things can happen.

“Thank God, most importantly, everyone was safe and okay and I’m sure they will be back out tomorrow.”

Before that race-ending incident, it was a day of high winds and compelling drama on the second day of the Louis Vuitton America’s Cup Challenger Playoffs Semi-Finals. The conditions took their toll on all four teams and proved the most challenging day of competition yet in the 35th America’s Cup.

In the first race of the afternoon Nathan Outteridge’s Artemis Racing resumed their rivalries with Dean Barker and SoftBank Team Japan and what ensued was a war of attrition with both teams’ boats being battered by the conditions.
With the wind levels challenging both teams in the pre-start sequence, Dean Barker’s SoftBank Team Japan timed their approach to the line better than their rivals and seized the early advantage.
Artemis Racing struggled against the conditions in the early stages, and their boat suffered damage on leg 2/8 which allowed SoftBank Team Japan to extend their lead to 26 seconds by Gate 3.
Nathan Outteridge’s struggles continued with another mistake, this time a nose dive out of the gate 5 turn, further hampering their momentum, while, in contrast, Dean Barker’s team remained composed and extended their lead to 47 seconds.
But just as their rivals had, SoftBank Team Japan suffered damage to their boat, this time in the final stages of the race, leading to a nervy end to the first competitive action of the day for the Japanese team.
However, Barker’s team did not let the damage hold them up and they crossed the finish line first. Meanwhile, back out on the racecourse, Artemis Racing had come to a stop as Nathan Outteridge radioed through to America’s Cup Race Management (ACRM) to confirm his team’s retirement from the first race.

“We had a bit of a stuff just before the start of that first race began and blew out a bunch of the fairings,” revealed Nathan Outteridge, whose team ultimately suffered successive defeats.
“We spent a lot of time just trying bandage up the boat and it just shows how fragile these boats are.

“It was a disappointing day but you just have to keep chipping away. It was pretty tough but now the boat is back in the shed and we are just doing all the checks and I’m sure it will be good for tomorrow.”

For Sir Ben Ainslie and Land Rover BAR, day one of the Louis Vuitton America’s Cup Challenger Playoffs Semi-Finals was disastrous. A damaged wingsail in race one forced the British team to retire in their opening race against Emirates Team New Zealand. They were unable to replace the wingsail in time for the second race, handing their rivals another victory and giving them a 2-0 advantage at the end of the first day of Semi-Final action.

On Semi-Finals day two the British team returned to the racecourse aiming to cut the deficit to their Kiwi rivals and they started strongly, beating Emirates Team New Zealand across the start line and seizing the early advantage.
A slight nosedive on leg 2/9 halted their initial momentum but Ainslie and his team recovered quickly to keep the team ahead through gate 3.

However, Land Rover BAR were punished for another mistake on leg 5, allowing Peter Burling to seize the initiative and take the lead for the first time in the race.
Ultimately, that mistake was to prove pivotal as Burling held his nerve in the final stages and crossed the finish line 24 seconds ahead of his rival, taking another step closer to the Louis Vuitton America’s Cup Challenger Playoffs Final.
Attention turned back to the battle between SoftBank Team Japan and Artemis Racing in the third race of the day, with the pressure on Nathan Outteridge following defeat to Dean Barker earlier in the day.

However, that pressure intensified right from the start of the race as Barker won the duel in the pre-start sequence to give his team the early advantage.

Artemis Racing’s day went from bad to worse as their challenge was hampered dramatically by a penalty, awarded against them for sailing out of the racecourse boundary on leg three.
The setback all but ended their challenge, with SoftBank Team Japan able to stretch their lead to one minute and 15 seconds by the gate 5 turn.

Nathan Outteridge and his team refused to concede defeat this time round, but there was to be no late fightback as SoftBank Team Japan crossed the line with Artemis Racing following, one minute and 27 seconds behind.
Back-to-back victories on the day for SoftBank Team Japan gives Dean Barker’s team a 3-1 advantage over Nathan Outteridge’s Artemis Racing, meaning just two more wins would see the Japanese team progress to the Louis Vuitton America’s Cup Challenger Playoffs Final.

“We are obviously thrilled with the day, that was pretty full on by anyone’s standards,” said Dean Barker on his SoftBank Team Japan’s efforts on a victorious day.

“The boats were just flying around and I think we had our top speed in the boat since we’ve been sailing it.

“It’s a fantastic effort from the guys on the boat and when you get a course like we had today it’s very taxing on the crew, they all did an amazing job today.”

However, attempting to recover from their poor start, Peter Burling’s team paid the ultimate price for pushing their boat to limit, suffering a spectacular capsize which ended their race and put three of their sailors into the water. The dramatic scenes ended the contest as the officials raised the black flag, resulting in the race victory being awarded to Land Rover BAR.

After the race, Burling confirmed that all six sailors were unharmed, bar some cuts and bruises, and that the team’s shorecrew were immediately starting work to repair their damaged yacht. 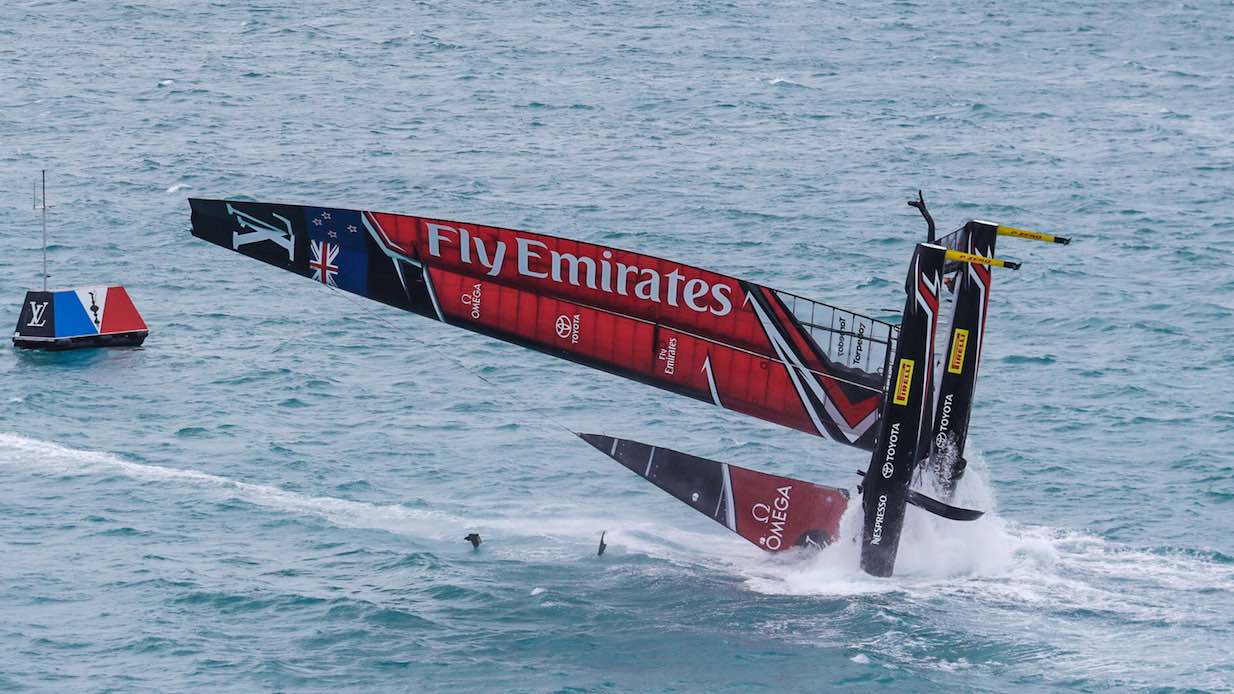