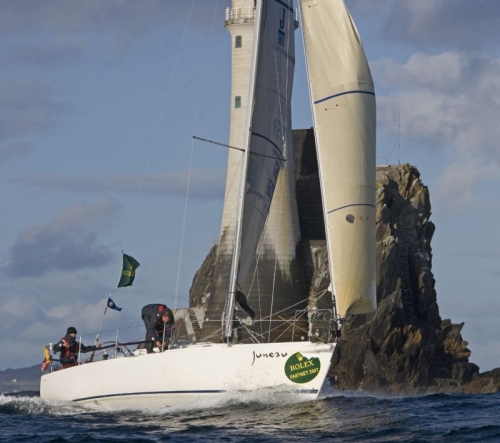 Having competed double handed in the Fastnet for the first time in 2005 and finishing 7th from 20 racers we were keen to try and improve on that result in 2007. I?ve been sailing with Mike ?Senior? West since we sailed together fully crewed in the 2003 race when I was a charter skipper for Alex Thomson?s Formula One company. A fairly inauspicious qualifying campaign saw us starting the race in third overall in the season?s double handing standings, we?d won the most recent channel race in the double handing class though ? a good result in the Fastnet was going to be essential to our chances of overall victory in the Psipsina trophy.

The Friday before the race brought lots of storm warnings from the Met office and on Saturday the RORC confirmed that the start was to be postponed for 25 hours to Monday morning ? meaning we were going to start 11.40 on Monday. The atmosphere in Hamble that evening was great, all the sailors hyped up for a windy Fastnet were out and drinking in force! There was lots of rumour around further postponements but nothing concrete. As it turned out we started as planned on the Monday.It was a classic South Westerley at the start with the Island side being favoured tidally. We had a fairly average start but managed to work the tide and shifts well being the first double hander in our class and first 105 out of the Solent (there were 6 105?s double handing and 3 fully crewed).