”St. Petersburg, Russia (August 3, 2017) – A champion on the ropes, an underdog on top and a pitchpole in winds gusting towards 30 knots in St Petersburg – Thursday might have been cut short by the extra large conditions, but it packed a lot in.

When a perfectly preserved Tom Cruise is rolled out to play Phil Robertson in his biopic, he will dwell on the tension of this day in Russia. The New Zealand skipper had all day waiting to go back out and has all of tonight ahead of him, to think about how to overcome the 2-1 deficit in the best of 5 SUPER 16 match against the outsider, Steve Thomas – somebody call Robert Redford’s agent.
All is not lost and it could have been worse for Robertson (CHINAone Ningbo), as he was 2-0 down quickly before a wait on the water for almost an hour allowed him recoup. But it is not a position that the Match Racing World Champion and clear leader this season, is used to.
On Wednesday, Thomas (RPM Racing) managed to capsize before he had even started racing, on Thursday, he nearly knocked out the champion.
“It was pretty fresh to start with, there was a good bit of breeze,” Thomas, the Perth skipper said matter-of-factly.  “I think that sort of leveled the playing field a little bit for our team because it became less about match racing and more just about sailing the boats, which is what we really needed to be able to compete with Phil in any races.”
Robertson put it more bluntly: “It was very top-end survival stuff. It built pretty quick and fast and with very steep chop, so pretty challenging to get the boats to attack and get them moving again. We were probably pushing the boat a little bit too hard and putting it out of position by doing that. But it’s no walk in the park when you’re racing Stevie, I’m not surprised it’s at this point.”
The racing was neck-and-neck all morning as the skippers on water pushed these high-performance M32 catamarans to the maximum.
“The first start we got a little bit of a last minute hook on him which made him do a slow tack,” Thomas said. “The second start, he got the better of us, we were a bit hesitant to do the last minute hook. So we each went our own way, but we got the first gybe in, which put us in the lead and from there we were able to hold him off. And then on the last one it was quite windy, probably on the limit of the boat handling for the amount of sail area we had.” There was only a couple of boat lengths in it at the end of the last two races.
Thomas had lost 3-1 to Robertson in his last outing in the quarter-final of Match Cup Australia in his home waters in Perth in March. That was Thomas’s last outing on the World Match Racing Tour and it is fresh in his memory.
The main thing that will help Robertson sleep easier is that the knockout phase moves tomorrow into the heart of St. Petersburg onto the Neva River in front of the Peter and Paul Fortress. “It’s going to be completely different, it’s a new location, zero wind pretty much and a lot of current,” Robertson, who has sailed there several times before, said. It will be at the front of Thomas’s mind too. “The lighter breeze, where the match racing comes more into play, might give Phil the edge back,” Thomas said.

After winning the all-Russian first Sail-Off against Evgeny Elfimov (M1 Cloud) 2-0, Evgeny Neugodnikov (Team Tavatuy) was 1-0 down to Polish skipper, Lukasz Wosinski (Delphia Sailing Team) when sailing ended for the day. Neugodnikov, with only five days of racing experience in the M32, led Wosinski during the race at times but an ever improving Wosinski had the overall grasp on the race. “We are not here to win this regatta.” Commented Wosinski when looking ahead at his day. “It is about the team improving and about getting to know these boats. That is what we came here to do.”
In the first of the SUPER 16 pairings to be completed, Matt Jerwood (Redline Racing) beat Sally Barkow (Team Magenta 32) 3-0 to go through to the quarter-finals. The Australian skipper showed timing, speed and control to lead off the start and win all three races from wire to wire. “It was pretty nuclear out there,” Jerwood said. So was he. Team Magenta 32, the only women’s team on the Championship level of the tour, had finished qualifying strongly and are continuing to build over the 2017 season but ran into a slick Redline Racing team that are really firing. “They’ve been doing a lot of match-racing together, a full winter of training and have had the same team for the whole season, we have to respect that,” Barkow said.
Racing tomorrow is expected to see the remaining SUPER 16 pairings close out to leave the event with the final eight. Forecast models predict a big change for the teams as the boats will race on the tight waters of the city centre with 5-10 knots of breeze from the south. A shorter race course with a higher number of laps will expose boat handling and provide an unforgiving arena for close-quarter match racing. The first race is schedule for 10:00 local time (UTC +3).” 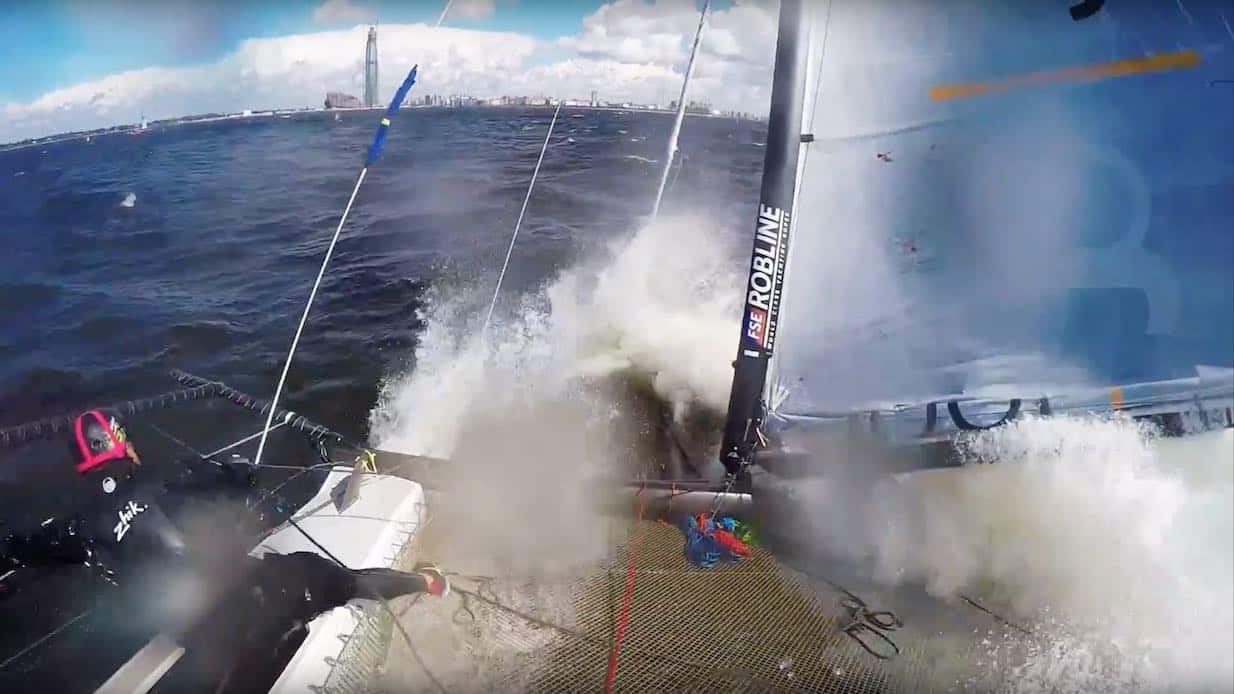