Pressreleasen i sin helhet:
The leader of the Route du Rhum-Destination Guadeloupe, Sébastien Josse on the ULTIME Maxi Edmond de Rothschild, has sustained serious damage to his starboard bow while racing in the Bay of Biscay, 135 nautical miles northwest of La Coruna.

His team and Race Direction are collaborating to ensure the 44-year-old skipper and the 32-metre ULTIME reach a safe haven as soon as possible.

Maxi Edmond De Rothschild had been leading by 32 miles with François Gabart on MACIF in second when Josse came to a violent halt. Going on deck he immediately realised there was substantial damage to the starboard float.

He alerted his shore team at just after 0530hrs CET (0430 CET).  Josse reported he had 30 knots of northerly wind and a swell of 4.5 metres. The Frenchman was making about 4 knots in a southerly direction this morning at 0800hrs CET (0700hrs TU)

Gabart i ledning
Gabart meanwhile has resumed the race leadership, passing nine nautical miles to the west of Josse’s stricken trimaran at just over 25kts, and is now more than 30 miles ahead of Thomas Coville’s Sodebo Ultim in third place.

Armel Le  Cléac’h stannar för lagning
After having had to make an express 35-minute pit-stop yesterday evening, when he met up with his shore crew off Roscoff to repair an electrical charging problem, Armel Le Cléac’h on Banque Populaire IX is fifth, at 62 nautical miles behind the leader. He reported this morning that he now faces a more complicated weather pattern because of his delay.

“I am a bit behind the fleet but I will need to get across the depression to the northwest wind. It is not easy though, between checking the meteo and the wind here on the water, there is a lot going on. We are trying to find the best way to get to the northwest. There are a lot of people on the water out here, a lot of traffic. I am trying to be as quick and safe as possible but there will be more wind and sea the later we are to the depression. But right now I am very much in ‘hunter’ mode. We have to be patient.”

Alex Thomson leder efter vågat beslut
In the IMOCA class Alex Thomson’s opening move to the north of the first depression on Hugo Boss has paid an early dividend. The British skipper leads by 13 nautical miles from the pair of French skippers who are now 55 nautical miles to his southeast, Vincent Riou on PRB and Paul Meilhat on SMA.

Thomson’s gutsy choice, going alone to the north of this first depression, has him making more than 21kts this morning while Riou was making 10kts at 0800hrs CET (0700hrs TU).
Jérémie Beyou, one of the pre-race IMOCA favourites sailing the new Charal reported a complicated first night at sea. He was looking to find the best route through this first weather system whilst also taking account of the bigger, more violent low due to hit the fleet on Tuesday and Wednesday.

Lying ninth this morning Beyou told Race HQ in Saint Malo: “There is not much wind at the moment. We made good progress to Ushant but it is a bit painful. There is a lot of traffic but for once the cargo ships have been co-operative. We are out of the traffic routes now and so it will get better. I do not know where the others are, I have not yet seen a ranking. But the wind will come in fast and strong. I’ll try to be ready to get everything tied down as the descent down Biscay will be tough.”

Skadad IMOCA
There is immediate disappointment for the Saint Malo-based IMOCA skipper Louis Burton who has been forced to make a U-turn and return home with damage to the starboard foil of his Bureau Vallée, formerly the Vendée Globe winning Banque Populaire.

The Class40 leader Yoann Richomme on his new Veedol-AIC is also taking the high road, the more northerly routing, as he breaks away from the main peloton. Richomme has three rivals within a mile of him. Britain’s Phil Sharp on IMERYS CLEAN ENERGY is seventh, 5.5 nautical miles behind.

Richomme said this morning: “Approaching the first depression which we are expecting, I just hoisted the spinnaker. It’s still a bit of a risky exercise but everything went well and I feel like I’m not too badly positioned. We have a dark night, it’s complicated. We can’t see anything at all. We are crossing courses with cargo ships so we have to be on standby all the time. The wind will be a bit erratic for a while but then it will stabilise.  There are already little frontal passages last night and now there will be work all day. I managed to eat a little bit but even that was stomach-turning. Strategies are not easy, it takes a lot of time.”

The 2014 Multi50 class winner Erwan Le Roux rejoined the race on FenetreA-Mix Buffet after incurring a four-hour penalty required by the class rules after he had to stop and repair a problem with his rudder. Le Roux had a deficit of 100 miles as he rejoined the race but has gained through the night to be 41 miles behind class leader Lalou Roucayrol on Arkema.

Skeppare evakuerad efter grundstötning
Guadeloupean skipper Willy Bissante was evacuated into Roscoff safely at 0500hrs this morning, after being rescued off his Rhum Class 50 footer C’La Guadeloupe which grounded on a small island off Perros Guirec. 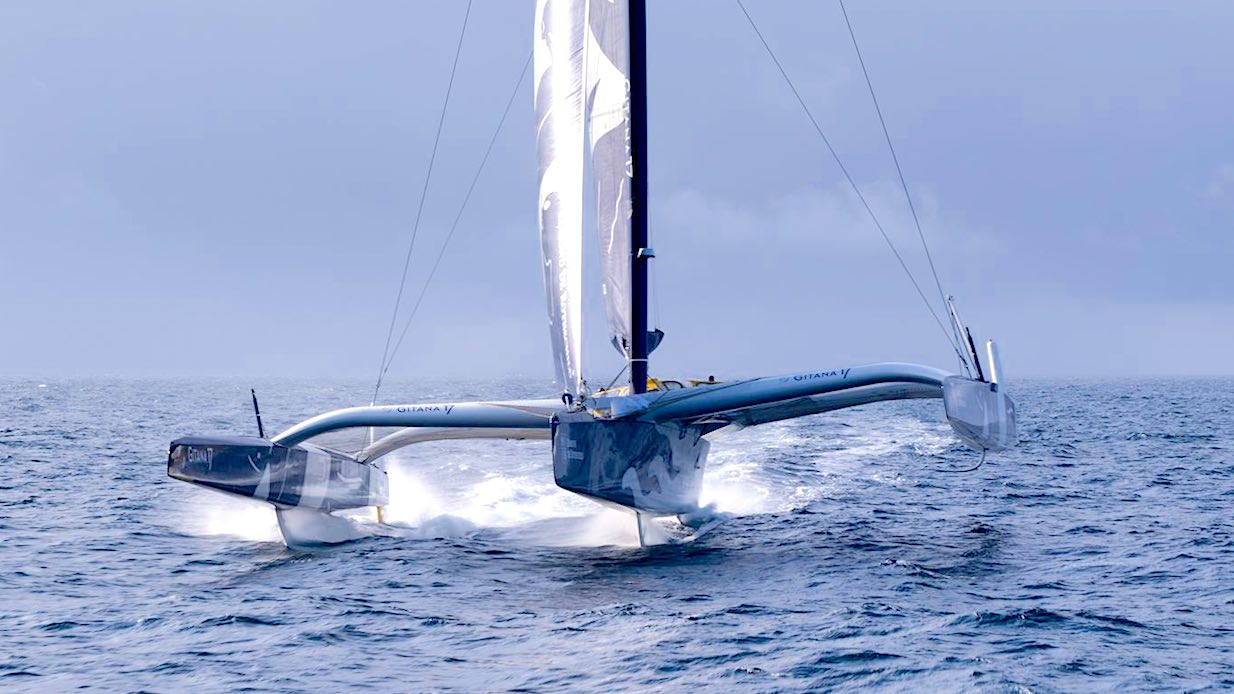