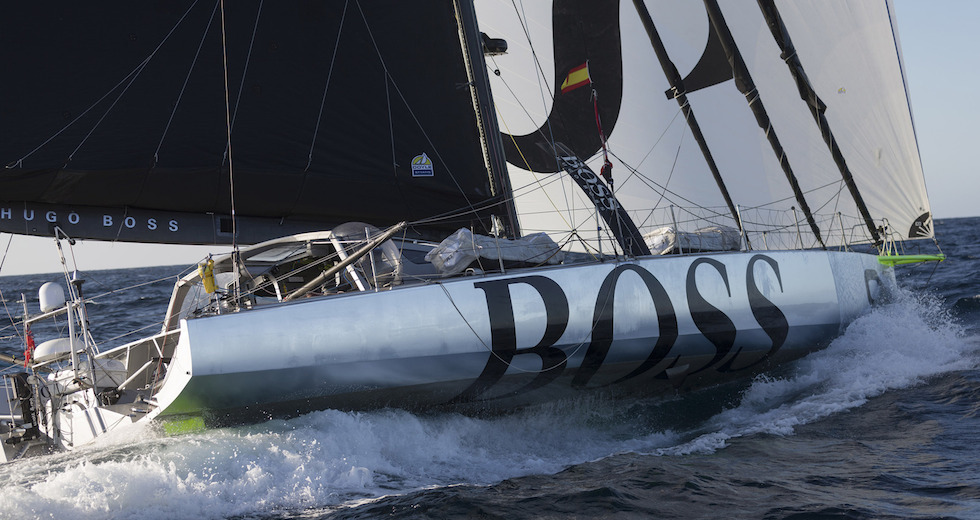 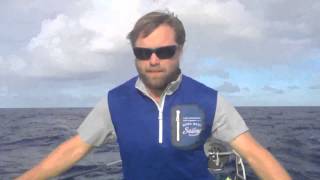 “The English-Spanish duo are heading to Salvador de Bahia, Brazil, under engine. Making around 6 knots with enough to fuel to get most of the 370 miles west to the Brazilian port should which should take around three days. The duo had already set a new record in the Mediterranean for the passage from Barcelona to Gibraltar and a course record to the Equator.

Thomson, 40, and Ribes, 43, were making a sail change when it is believed that the central pin in the headsail furling drum sheared while the British skipper was right beside it, leaving the mast unsupported from the front of the boat. He had to watch helplessly as the mast and sails fell backwards, the mast itself breaking after it landed resting half on the boat and half out.

“ The guys were both on deck. They were putting the jib top up and taking the J1 (headsail) off. Alex was up on the foredeck, Pepe was at the mast helping him out. The furling drum, which holds the J2 to the deck and is a fixed stay sheared, the main steel pin in the drum sheared, and so because they were in the middle of changing from the J1 to the J2 there was only one forestay up at that time, for that brief period. That meant the furling drum was unsupported. Alex said that it was like slow motion from there, the mast fell backwards into the water and rested on the stanchions and the daggerboard. At that point the mast broke. And it was gone pretty much immediately. It did not break on the way down. It ended up sitting half in the boat and half out and at that point it broke. There is none of the mast left.”

Thomson and Ribes had been sailing in moderate easterly breezes and big seas when the accident happened, right before his eyes. He recalls “I was looking backwards as Pepe was bringing a sail to me to plug in behind me and all of a sudden I saw this just break. All of a sudden I saw this just break, the (furling) drum just blew up in the air and the sail with it. I looked up and instinctively I knew the mast was going to fall down. It kind of hovered there for a few seconds and then fell backwards into the water. Within a couple of minutes the mast broke in two where it was hinged over the boat. Pepe did a great job with the grinder cutting it away before the mast made a hole inside the boat in the big waves we had.

It is extremely disappointing. We were leading the race by 60 miles, we had broken the record to Gibraltar.”  “We felt we were in control of the race. Yes we had made a couple of minor mistakes, but really we were performing brilliantly. I am disappointed for our team, for Pepe, for all of us. It is heart wrenching when these things happen.”

Both of the closest rivals to Hugo Boss paid warm tributes to the British-Spanish duo. Guillermo Altadill (ESP) of Neutrogena, with whom Thomson took second in a two handed Transat Jacques Vabre race in 2011, said:

“As the Spanish popular song says “when a friend leaves, something dies in your soul”, and that’s how we feel today. Alex and Pepe are our adversaries, we´ve fought with them and competed in the water, but we wanted this to continue up to the finish line. Because when an opponent leaves, this means there is one less of us that can help when things get tough. The history of ocean racing tells stories about epic and supportive rescues between competitors; you can ask Alex or Jean Lecam, their own opponents and also friends, were those who pulled them out from the claws of the common enemy we all have to compete against, the Ocean and its forces. Alex and Pepe if it’s any consolation I never doubted that this race was yours and the only way yo u could get it snatched, by the adversity we all fight in this sport, that common enemy that waits for us in every downpour, gust of wind or at the end of each wave we surf.”

And from new race leaders Cheminées Poujoulat, Swiss co-skipper Bernard Stamm – himself no stranger to bad luck and adversity and a long long time rival of Thomson’s said:

“First and foremost we are sorry for him. And for the race too, I am sorry, because it loses the favourite. We have lost a strong rival and that is sad. From our point of view we try to sail safely so this kind of thing does not happen. But it confirms again not to take risks.”

The race goes on
Cheminées Poujoulat take over the lead of the Barcelona World Race with a narrow margin over Neutrogena. Bernard Stamm and Jean Le Cam on Cheminées Poujoulat are slightly slower than Altadill and José Munoz but the two Farr designs are racing side by side 22 miles apart west-east as they start to negotiate the Saint Helena high pressure zone’s western side. They will have lighter winds though tomorrow before breaking into the N’lies which will slingshot them south faster, into the low pressure train which is lined up for them.

For their part, We Are Water and One Planet, One Ocean & Pharmaton continue their progression about fifty miles from each other. Two hundred miles from the equator, the crew of Spirit of Hungary will soon also be in the South Atlantic waters ready to take their turn in the battle with St. Helena.

“They are unharmed. That is the most important thing. They called us. We called race direction. We went into crisis mode. We came up with a plan fairly quickly, to start their engine and start motoring towards Brazil. That is what they are currently heading.  They were 370 miles from Salvador de Bahia when they started the engine. Now (1300hrs UTC Thursday) they are 320 miles from Salvador, and they have enough fuel to pretty much get themselves there. We have two crew flying there already. It is an 18 hour flight from here. They will meet them on a tender to bring them into the port.  The boat is undamaged. There is a bent stanchion and a scratch on the coachroof. The boat is secured and seaworthy.”

Last night we had 6 to 24 knots of wind. And so we were trimming all the time. Always we have someone on deck. In the next 24-48 hours we need to avoid being becalmed, trapped by Saint Helena. We must go around it. It is like a circuit we have to go around the inside track.  Since the start of the South Atlantic we have our little routine. We work shifts in the night, watches, and during the day we try to be together more, we talk. We have not seen many animals and no boats. That is our life, that is racing.