Pressrelease:
”Le Cléac’h, 39, from Brittany, crossed the finish line of the race in Les Sables d’Olonne, France, at 1537hrs UTC after 74 days, 3 hours, 35 minutes and 46 seconds at sea on his 60ft racing yacht Banque Populaire VIII.

His time sets a new record for the race, beating the previous record of 78 days 2 hours 16 minutes set by French sailor Francois Gabart in the 2012-13 edition by 3 days, 22 hours and 41 minutes.

The Vendée Globe, which was founded in 1989, follows the ’clipper route’ around Africa’s Cape of Good Hope, Australia’s Cape Leeuwin and South America’s Cape Horn.

Second-placed Alex Thomson is expected to cross the finish line on his boat Hugo Boss around 12 hours behind Le Cléac’h.”

At a packed press conference last night in Les Sables d’Olonne the winner of the 2016-2017 Vendée Globe, Armel Le Cléac’h talked about his race and his boat. The pressure was on him particularly from Alex Thomson on the voyage back up the Atlantic, but he explains that thanks to his boat and team, victory would be his on his third attempt at the Vendée Globe.

“Alex pushed me hard right to the end for a few hours before the finish. We had a fast sail down the Atlantic and he really stood out. In the Southern Ocean, I did fine thanks to my experience and the performance of my boat. I was two days ahead at Cape Horn and thought I had gained a real advantage. Unfortunately, the weather in the South and North Atlantic weren’t easy for me. That all favoured Alex, who caught up at every stage. It was hard mentally. That’s why just now I let things go (He had tears in his eyes at the finish – editor) It was after all the pressure since the Horn. With Alex it was very different from the scenario with François four years ago.”

“I can remember my disappointment about being so close to victory. My partner said we’d like to return to the race and asked me if I’d like that. A few weeks later I agreed. So there was a project of building a new boat with a dream team. The boat is a good all-rounder, particularly in transitions, which are key moments. The boat matches my way of tackling the Vendée Globe. She’s looking good at the finish. The boat never flinched. She performs well and I enjoyed sailing her.”

“There have been problems. I can remember I was expecting a phone call. I suddenly heard a bang and my J1 had fallen down. The hook at the masthead had broken, so I couldn’t use that sail after the 13th December. It was a sail that worked well upwind, so that made matters complicated. I then got a message from my team telling me the other hooks might break too. It was like the sword of Damocles hanging over me. There were problems with unidentified floating objects, but in general no other real problems. If I hadn’t had the hook problem, I would have been faster, but there’s no point in crying over spilt milk. The foils worked well. In the beginning three years ago, I was sceptical, but then won over. Banque Populaire was the first to trial them. We showed that they worked and now the first three boats are foilers. I sailed my way using them when the sea allowed. You can’t use them throughout the voyage. If I needed to put my foot down, I used them, like when Alex broke the 24-hour record.”

François Gabart: “Well done Armel! You had a fantastic race. You were the favourite and were there to win. You dealt with that perfectly. You are a big winner.”

Vincent Riou: I’m really pleased for you. That’s why I have come here , because I’m happy to see you winning the race. I wasn’t lucky this year, but you have to enjoy the success of others. You really controlled the race and kept your cool on the way back up the Atlantic.”

Loïck Peyron: “W’re really looking at a gentleman here. A real solo skipper. His knowledge and mastery were impressive. That’s not new. He didn’t get there by chance. Over theyears we’ve seen what the old man can do, but now he an tick that box. The Vendée Globe, done.” 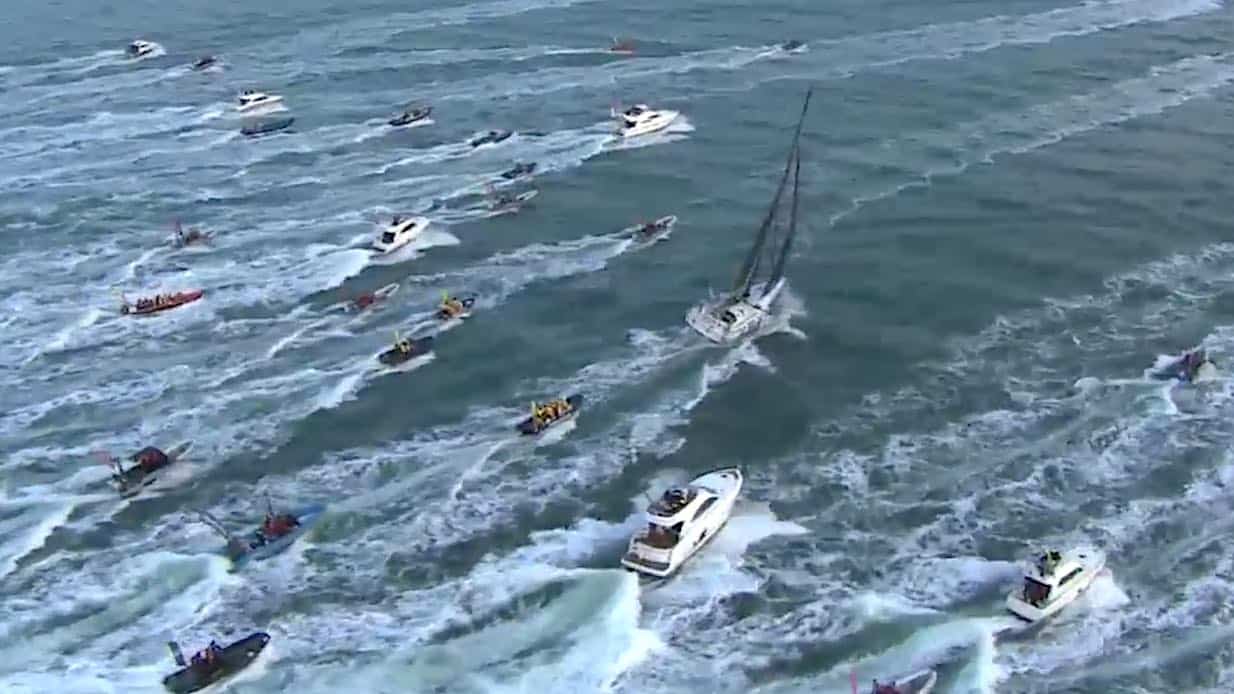