” The capsize took place during the team’s eighth day on the water. Conditions were fresh, with building winds whipping up waves against one of the strongest ebb currents of the year. As the team turned the giant catamaran downwind, the front of the boat nosedived and the boat pitch-poled.

“When the nose went down, the wing hit and a few guys went in the water,” said tactician Tom Slingsby. “We were unsure if the wing would snap, so we all climbed off the boat.”

With the boat on its side, the sea conditions quickly inflicted damage on the wing. The boat was pulled out to sea by the strong current, and as darkness fell, the team was still working to secure the catamaran platform and bring it back to base. The wing is destroyed.

“There’s no question this is a setback. This will be a big test for our team,” said skipper Jimmy Spithill. “But I’ve seen these guys in a similar situation in the past campaign before we won the America’s Cup. A strong team will bounce back from it. This won’t stop us from winning the America’s Cup.”

Each team competing in the 34th America’s Cup and Louis Vuitton Cup (the America’s Cup Challenger Series) can build two AC72 boats. This was the first of two boats to be built and launched by ORACLE TEAM USA. The second is due to be launched early in the new year.

“This is a challenge for ORACLE TEAM USA,” said Stephen Barclay, the CEO of the 34th America’s Cup. “The team will assess how to fix the damage caused by the capsize to this boat and will adjust its program as necessary. We expect them to be ready to defend the Cup as planned.” 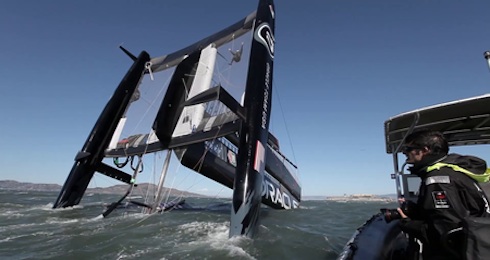