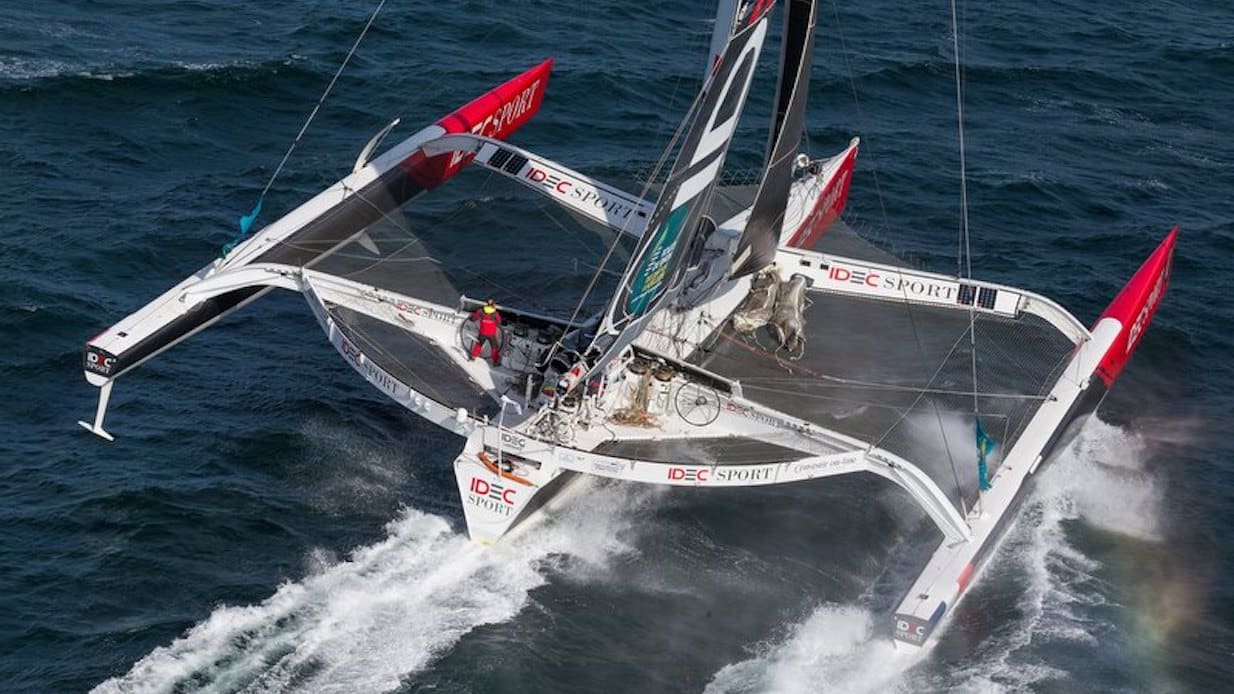 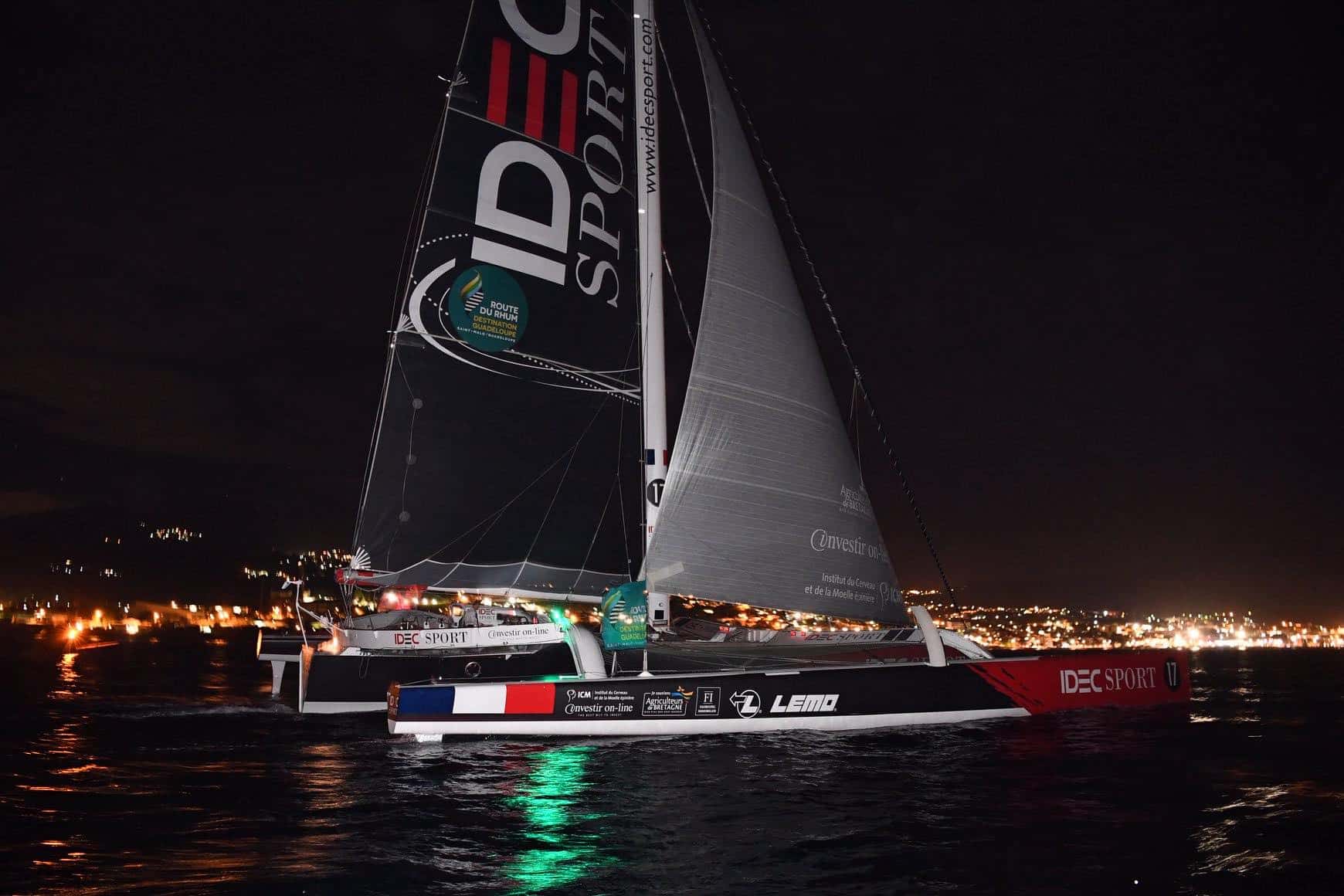 Pressreleasen i sin helhet:
In the closest finish since it was first staged in 1978, the French ocean racing veteran Francis Joyon won the 40th anniversary Route du Rhum-Destination Guadeloupe solo transatlantic race from Saint Malo to Pointe-À-Pitre early this morning.

In the clammy heat and very light winds of the Caribbean night, Joyon, 62, glided across the finish line on IDEC Sport at 23:21.47 local time (03:21.47 UTC) to pip the poster boy of French sailing, François Gabart on MACIF by just seven minutes and eight seconds.

This concluded a heart-stopping finale in the ULTIME class to the classic ocean race which takes place every four years and started last Sunday off Saint Malo in Brittany, with six classes and 123 skippers competing in total.

Competing in his eighth Route du Rhum-Destination Guadeloupe, Joyon, aged 62, set a new record time for the 3,542-nautical mile course of just seven days, 14 hours and 21 minutes. This reduces the previous best time set in 2014 by the French sailor Loïck Peyron sailing the same boat as Joyon but under the name Banque Populaire VII.

“It was only one-and-a-half minutes before the finish that I realised I could win,” he added. “Before the last gybe François was faster than me with his Code Zero (sail) and practically all the way to the finish line I had a vision of him steaming in and passing me again because he was going two or three knots quicker.

“After the start and getting through the bad weather and now this finish, it was an extraordinary race,” he continued. “I am happy for the boat as there are no other boats which have won the Route du Rhum three times. I am happy too for my team; we are a little team but together we have prepared a boat which stood up to this Route du Rhum right to the finish and which arrived in a good state.”

Joyon only took the lead of the race at the final turn, the famous Basse Terre buoy, some 24 miles before the finish line as he and Gabart drifted their way around the windless west side of Basse Terre in the dark.

Gabart had led the race almost continually from the start with Joyon tracking him across the Atlantic but never overtaking and sometimes slipping back to over 150 miles behind. But it all changed as Gabart limped home on a damaged boat that had suffered the loss of one foil and one rudder.

At one point in the last two hours Joyon had extended to be over three miles ahead of his younger adversary, but Gabart proved faster in the very light airs. At one mile from the finish the two solo skippers were racing side by side.

When they arrived into the view of the thousands of waiting spectators it was like the denouement of a carefully choreographed thriller. But it was Joyon who took the finish gun to huge cheers, taking line honours and winning the ULTIME class for the biggest yachts in the race.

As he crossed the line the veteran Joyon remained motionless for nearly a minute. It was as if the quiet, reserved, self-contained mariner could not quite believe he had finally completed the victory of his career, more than 30 years after his first participation in the race known as the ‘Queen’ of the transatlantics.

The huge crowds reserved an especially loud welcome for Joyon, many having grown up with the Route du Rhum taking place every four years, and the arrival of the first finishers always mark the beginning of two weeks of parties in Pointe-À-Pitre. Family members of all ages assembled along the coast from early afternoon to make sure of the best vantage points.

In a fleet of six ULTIMES sailed by some of France’s highest profile most successful skippers, Joyon was considered very much the outsider. His boat is three tonnes heavier than Gabart’s newer foil-assisted MACIF. But his lifetime of ocean racing and record-setting experience perfectly complemented his IDEC Sport trimaran, on which he and five crew set the current 40-day, non-stop, round-the-world record in 2017.

Stormy conditions took their toll in the Bay of Biscay during the first 24 hours of the race with two of the newest ULTIMES having to abandon the race. Banque Populaire IXcapsized on the second afternoon at sea requiring skipper Armel Le Cléac’h to be rescued by a Spanish trawler.

Joyon’s victory means Gabart’s extraordinary string of successes is temporarily halted. The winner of the Vendée Globe, Transat Bakerly and the 2015 two-handed Transat Jacques Vabre, as well as being holder of the solo, non-stop round-the-world record, Gabart must have thought another trophy was coming his way.

But the hard-driving Joyon was unrelenting. A fiercely independent character, Joyon is a solo sailor who is happiest at sea. He loves the craft of ocean racing and the maintenance of his yacht’s systems, often preferring rustic simplicity over mechanical or electrical advantages.

In the ULTIME division where, due to the high speeds and high loads, weather routing is permitted by specialists on shore, Joyon prefers minimal intervention. In 2014 he relied on a single e-mail each morning and evening. “One word or two, a vague text to his phone is enough for Francis,” a previous router asserts.

“Guys like François Gabart have come up through training initiatives and have made sure they have the best of everything, but Francis learned everything himself,” Pella explains. “But although he is old school he loves all of the technology of these boats and loves to listen and learn. He loves the rigs, sails, and the everything about foiling. He has built boats from scratch himself, with his own hands, 40 years ago and has sailed everywhere in the Caribbean and all over the world.”

Pella added: “His team are his daughter and his son and a couple of friends. Compare that with MACIF and Gitana with teams of engineers and preparateurs and Francis does it himself or with his friends and family.”